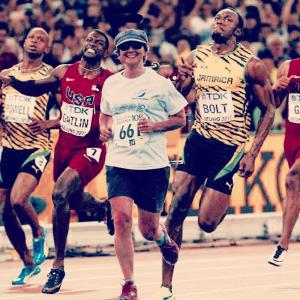 Best known for her plethora of gold medals at the Beijing and London Olympics, Griz Phillips then retired from international athletics and settled down with her dog Freddie in sunny Sussex. Fun loving Griz, can now be found pouring cups of water and pulling running caps off fellow team mates at West Sussex Fun Run League races. Griz has very kindly shared some of her running memories with us.

I started running in 2000 when I started doing cartoons full time.

I think I joined in 2013. I used to go running with my friend, Schoffe, and my dog, up on the Downs and up the river Adur, but she damaged her Achilles so that was the end of that. I bumped into the Hoppers when I was up on the Downs running with Freddie-the-dog one evening. I tried to join in but everyone ran off! I became a regular because I discovered I loved running in a group of friendly people.

The first time I did a WSFRL run – the Beach Run in Littlehampton! Ann had been nagging me for ages to come along to a fun run. I finally, reluctantly, agreed. It was a beautiful sunny evening and I just couldn’t understand while all these runners had given up their evening to run in a race….until the starting gun! Wow! That was my first ever race and it was absolutely wonderful! I remember pouring a cup of water over Peter Hopperthorne as I overtook him! Haha!

I’d started working full time on cartoons at home, so I wasn’t cycling like a loony across London anymore and started to put on weight. Also, missed the endorphin buzz from cycling.

I really love the Three Forts Half. It’s a lovely route. Off-road halves are my favourite type of race. And I love that it isn’t crowded like a lot of races. Also, love the Worthing Half too. It’s like Brighton but without the crowds. Don’t like crowds.

Ha! ha! Yes – Griz. I made it up. I drew a cartoon strip while I was at school about a girl called Grizelda Grizlingham and her friends. It became very autobiographical.

After 20 years of running to bring about weight loss…I am exactly the same weight I was in September 2000.