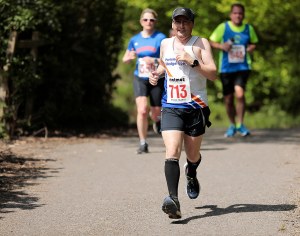 From surprising the school sports teachers that he had some athletic ability to stating that it would his one and only marathon. James shares his running memories and more.

Please tell us a little bit about yourself? i.e. where you grew up, family etc.

I spent the first few years of my life living on a farm just outside Steyning. My parents were both from farming backgrounds and had met through Steyning Young Farmers. I have two younger brothers; Shaun and David. Shaun is a really good runner but has never run competitively. David will run for a bus if really pushed to do so! At the age of seven we moved to Small Dole. We’re were very fortunate at that age to have so much freedom to spend all day every day during the summer holidays playing with friends in the local woods or fields. I met my wife Sarah at work. We were ‘introduced’ to one another by a couple of work colleagues who felt that we needed a nudge in the right direction! We’ve been married for just over a year now.

When did first start running?

I wasn’t very co-ordinated in my teens and to be fair I’m still not! This combined with my short stature usually lead to me being one of the last to be picked for football and rugby. The latter, I detested. It didn’t help that our PE teachers at Steyning preferred rugby to football.

Then one week, I think by then I was in the 3rd or 4th year – so 14 or 15, the PE teachers decided we were going to run round the sports pitches one particular week. And I was off! I clearly remember I got into third place as we went through the trees which divided the two playing field. As I came out from the wooded section there stood one of the teachers. “Well done Millen!” He shouted, before adding a very surprised “Millen!?” At that moment I realised I found a sport I could do. I was fortunate in my last two years at school to have a form teacher – Peter Crowhurst – who was a keen runner(I think he ran for Brighton and Hove AC). He even put me forward for an inter-schools event at Lancing. I have vague memories of running past the tennis courts by the leisure centre at Lancing. I struggled on the day and after I left school my running stopped.

I didn’t start again until 2003. I’d been unwell for the first two/three months of the year and feeling low I started looking at activities to do,  in addition to supporting the Albion. After seeing a poster for Steyning AC I joined them and shortly afterwards I also took up watercolour art classes. Strangely enough it was the art classes which would eventually lead me to joining the Hedgehoppers.

My first night at Steyning just happened to be one of their monthly club handicap nights. I could barely walk the following day!!

Since I picked it up again 17 years ago.

I joined at the end of 2007. I become friends, with Gary Payne’s wife, Julie through the art classes and the three of us started going to fun runs together. By this time I had joined the now defunct Southwick Strollers after being persuaded to run for them by Mark Stephenson on the way to an Albion way match. Like the Hoppers they were a lovely friendly club but they didn’t have training night’s so you only met fellow club members at fun runs. I decided to try and organise a training session along Hove Prom. Two of other Strollers had agreed to meet up with me but we got our wires crossed and ended up in different places. After waiting around a while I set off running on my own only to have a group of Hoppers pass me. The scene was set. Gary and Julie had already suggested I join the club. The following week I went along but we all we all arrived late and ended up running on our own. The following week I went to Christmas do. That was it. I was a Hopper.

The laughs, the friendships and the fantastic camaraderie. And course, Zoe’s cakes!

Finishing my mine and Brighton’s first ever Marathon. I remember Gary’s daughter Natalie, doing a little dance as I ran past her with about half a mile left to go. After the finish, my work colleague, Jo from the Events Team tried to get me to sit down on a chair they had for participants. I thought if I sit down, I’m never getting back up!! I eventually found my friends, sat quietly down next to Jenny Cass and burst into tears such was the physical and mental emotion of completing the marathon. I’m sure I swore I’d never complete another marathon!! I’ve completed another 13 since!

Race to the King. It’s the Arundel to Winchester double marathon which covers 53.5 miles over the Southdowns Way. I’d decided I wanted to complete a personal challenge for my 50th birthday year. Having done a few marathons I felt I should give an ultra a go – as you do!! I was going to do one ultra and only one. Yeah, yeah I hear you all saying. It’s like, I’ll just do one marathon and before you know it you’ve done a dozen or more! Anyway I recruited a fellow lunatic, Neal Cass to run it with me. Well there was a fair amount of walking involved too.

If you ever need the support of someone to help you through an ultra then I can thoroughly recommend Radio Neal. The station is mainly talk with occasional musical interludes. We were wonderfully supported by Jen and my fab wife, Sarah. I think 16 hours, 6 minutes and 2 seconds is by far and away the longest time I have been on my feet.

Back to that point about it being my one and only Ultra. Well we got back from Winchester and Sarah started looking at other ultra events I could do. Guess what!? Neal and I doing Race to the Castle next year

The Three Forts Challenge, both the half and the marathon (so technically that’s two events). Fantastically organised event by Mike Airey which is well supported by the local Rotary Clubs. It’s a great friendly event and the marathon has the best ever aid station at Truleigh Hill Youth Hotel. It’s a wonderful sight to see the Hedgehopper flag and Jen and gang ready to help re-fuel you.

Jimbo. I somehow came by this nickname on my second running holiday in 2012. I think Rob Clarke may have had a hand in this😀

2012 was also the year when Gary brought a sparrow back from the dead in Portimao. Although he hasn’t been on a subsequent running holiday, Rob and I have ensured that Gary’s Godly qualities and the spirit of Portimao is regularly told to many other runners on our running holidays!

On the weekend of my wedding last year, I managed to run either side of the wedding. With a parkrun on the Saturday, then the Windlesham Whip Fun Run on the Sunday morning. Unbelievably, for the fun run I was fuelled on a full english!

I feel really blessed to be part of such an amazing running club and to have made so many great friends through the mighty Hedgehoppers.