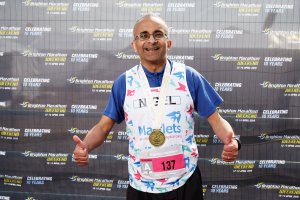 How many years have you been running for?
13 years

2007, a year after my heart attack and the year of my first Brighton Half Marathon

In 2012, a few months before the Olympics, there was a five mile fun run around the Olympic Park finishing on the Olympic track in the not-quite-finished stadium – Neal Cass kindly captured the closing moments on Youtube

Brighton and Hove Parkrun in Hove Park. Great opportunity for anyone to get in to running and lovely camaraderie

I’m not I’m aware of one

In 2002 I entered and won The Weakest Link