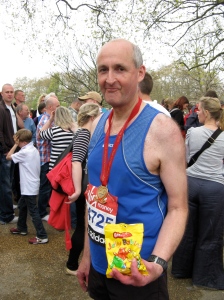 “Possessor of many names in his alter ego as chief WWUL data manipulator, Peter Hedge “Hopper” Thorne is one of the more “senior” members of the Hoppers, although there are many whose membership pre-dates his own by quite a few years. A relative newcomer to running, read on for the unexpurgated (you can get medication for that now – Ed) details of his rise to the lower reaches of the Hedgehopper ranks”.

I’m Portslade born and bred, although I pre-date the Hoppers by quite a few years! In fact in my teenage years I lived about 400m away from Roy’s house but I don’t know whether we overlapped at all – my parents moved out to Brighton in 1973, just prior to me leaving home and heading off to Uni in London. I spent 10 years there getting my degree and qualifying as an accountant before moving back to Brighton in 1984. I didn’t do any running in London apart from if we went out a bit close to last orders, or the bus was coming. Did a bit of squash to stay fit, but generally wasn’t very active. Once in Brighton we had 3 lovely girls and I started up a Chartered Accountancy business with a colleague which has now been going for 28 years, and has been great. I have been supporting Brighton and Hove Albion home and away since 1963.

I was approaching 50 in 2004, had stopped playing squash, and was going to a weekly informal “blokes” multi-gym session at Varndean School. I used to run from my house near Preston Drove to Varndean and back with my next door neighbour who was a good runner, and one night after getting back home I still felt a bit energetic so we did an extra run round the block. I had always disliked running at school and was surprised to find that I quite enjoyed it! A couple that I was friends with, Gary and Louise, had recently taken up running and they encouraged me to keep it going and I just kept going further and further, ending up with amazingly getting into the London Marathon in 2006 with my first application.

Louise was coached by one of the people who worked at Run in Blatchington Road and I started to go there to get my gear. They were a great bunch and in 2006 I got a lift off one of them, Tony Lindfield, to the Great South Run in Portsmouth. His partner Carol Feeney (Cliff’s daughter) was running too and she is a great friend of Jenny Taylor and we picked up Jenny on the way. Roy was also at the race so I found out all about the Hoppers! I started running quite a lot with Carol and Tony (mostly Carol as Tony was too fast!) and she suggested that I should come along on Tuesdays. I already knew Roy and Jenny, and before long I was completely at home in the club with all the lovely supportive runners. It made Tuesday nights a highlight of my running activity, followed shortly by going along to the fun run league races as well. A bit late in my life, but it is no exaggeration to say that it was changed completely!

So many good things, but the best has to be just all the friends that I have made. 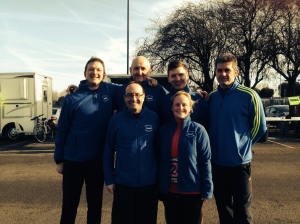 The running experience that always gave me the biggest buzz has been the approach and crossing of Tower Bridge at 12 miles in the London Marathon. I have done it 5 times and the noise and enthusiasm of the crowds is amazing.

What is the longest distance you’ve ever run?

My long runs always tend to end up as “run/walks”, and the longest one has been the Three Forts Marathon which I did in 2015 and 2016, and is about 27 miles. A very tough race and the highlight is the Hedgehopper aid station on Truleigh Hill at miles 8 and 13 (thanks Jenny!).

The Brighton Marathon, especially when I’m not running in it! I love the atmosphere and the way the whole of our town seems to be taken over by runners and supporters. There is always someone to take to the start, cheer on and meet up with at the end. I have done it twice, in 2011 and 2018, and was supposed to be doing it last year (prevented by illness) and this year. Recently I have supported Sonia on a number of occasions and ended up reviving her in some pub or other in the Lanes!

A lot of people have thought that I was involved in forming the club and that it was somehow named after me. Of course nothing could be further from the truth although there does not seem to be a definitive answer to its derivation! I have plenty of “noms de plume” but a nickname that I have picked up is ”Hopperthorne“, and no prizes for guessing who came up with that one, Grizhopper!

I have a Lower Second Class BSc Honours Degree in Zoology from University College London. 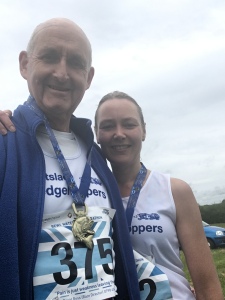 One of the most satisfying things to come out of my running “career” has been encouraging my eldest daughter Katy to start running after she left school and, despite outsprinting her at the end of her first race for the Hoppers (Fittleworth 5), seeing her progress to running for Brighton and Hove, Cambridge Hare and Hounds, Thames Hare and Hounds and Surrey Cross Country, performing at a decent national level, including the current two best ladies’ times at Preston Park parkrun. No idea where she gets it from, but it’s not her Y chromosomes!

One of my greatest honours remains having a stranded fencepost named after me at the junction of the Foredown Path and the SDW (thanks James!) and if it survives me, it would be a candidate for a spot for my ashes to be scattered round!!! (Don’t be going tempting fate! – Ed)