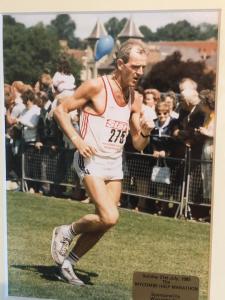 This week’s Friday Feature is Richard Fitzpatrick. Although one of the longer serving members of the club, Richard is still searching for his sense of direction in life. Lover of a freebie, Richard has kindly shared his life and running memories with us.

I was born in Catford South East London on the 15th June 1951. I am the third youngest of 11 children; 4 brothers; 6 sisters and yes, my father was a Catholic.

We were poor and hungry and the only form of heating we had was to suck an extra strong mint! We were entitled to free school meals and uniform vouchers. I left secondary modern school at the age of 15 with no academic qualification. I wanted to train as a doctor-fat chance given my education history! I had various jobs: apprentice milkman, shoe salesman, accounts clerk in central London.

In July 1969 I applied to the Brook Hospital, Woolwich, South East London to train as a nurse. I attended night school and gained 5 GCSE grades A to C. I qualified as a State Registered Nurse in 1972. I moved to Birmingham and undertook psychiatric nurse training leading to a qualification to a Registered Mental Nurse. After spending 10 years in Birmingham I moved to High Wycombe Buckinghamshire to take up a post of as community psychiatric nurse.

In 1987, I moved to Brighton and Hove for a senior role as a clinical nurse specialist for HIV and mental health. I also completed my Honours Degree in Community Nursing in Sussex University.

To date, I have been in the nursing profession for 51 years and planned to retire this August.

To relax I like to watch documentaries, just started to grow lettuce and carrots from seed, purchase a hybrid bicycle-although I am nervous riding solo, so now I belong to a cycling club-not your lycra crowd more of a leisurely ride out followed by tea and a big piece of CAKE.

I commenced running in High Wycombe in 1984. I was watching the London Marathon with a Marlborough cigarette in one hand and a packet of Bourbon biscuit close to my other hand while dunking and smoking. I was envious of the runners and excited at watching the fun they were having. I started to run solo and realised how short of breath I became so I stopped smoking 20 Marlborough cigarettes a day and joined the Handy Cross Running Club. We met on Tuesdays, Thursdays and Sundays and usually ran 9 miles on a Tuesday, 7 miles on Thursday and 18 miles on Sunday.

I ran my first half-marathon in High Wycombe in 1985 and was elated in finishing the gruelling route in 94 minutes. I went on to run 42 half marathons, and 2 marathons since. 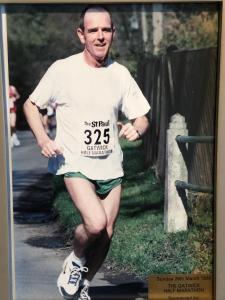 When did you join the Hedge Hoppers and why/what made you become a regular?

I joined the Hedge Hoppers in 1987. I became a regular as it was similar to the club in High Wycombe.

What’s the best thing about being a Hopper?

The banter, friendliness, motivation, equality, running up the Downs and organisation.

My favourite running memory was the Great South Run 2019. Because I was given a free number and access to the VIP area which, included the skies the limit pampering such as full English Breakfast, three course lunch,  Prosecco, and loads of quality freebies. Oh did I mentioned free physio massage?

What is the longest distance you ever run?

The London Marathon and the Seven Sisters marathon but not consecutively!

The Hastings Half Marathon is my favourite running event because the support of the locals is truly inspiring.

Do you have nickname and how did you come-by it?

I don’t have a nickname, if i did, perhaps it should be “Mr Freeloader”!

Okay, did you know that Danny La Rue, famous singer, dancer and known for his stage drag persona gave me £50 but, take note, there was no condition attach as I am not that cheap. I was holiday in Ibiza and when Danny learned that I was a nurse he was concerned that I might be a little short of spending money. Of course I was!