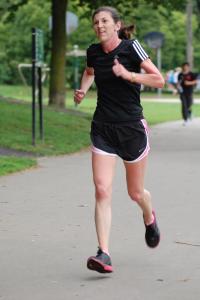 From being whisked out of school to collect her spikes, participating in the early days of the West Sussex Fun Run League and a Sussex champion but not at running. Sarah Russell shares her running stories and more.

I was born in Leicester and we moved to Brighton when I was 4. We originally live in a house called Hollingside on the Ditchling Road opposite the Downs school. We didn’t stay long as I wouldn’t go in the garden as I thought the flats at the back were falling down. We moved to Hollingbury to the house that Mum still lives in. I went to Carden School then Varndean.

I started running at the age of about 12, previous to this I had been a gymnast and swimmer. It was Dad that suggested I try running after the NTC sports day I ran in the 400-metre relay. I then joined Brighton and Hove Athletic Club.

I have fond memories of turning up at Withdean on a Saturday and boarding a coach to go to an athletic meeting or cross country run. I even had the opportunity to run in the National cross country championships at Warwick racecourse.

At school I was thought of as not being very sporty, until 1982 when the school cross country team was a member short and one of the team told the sports teacher that I ran. I was swiftly taken out of class and driven home to collect my spikes. The shock on Mums face when the sports teacher and my self-appeared on the doorstep. The school team won the schools cross country championships. I then discovered I had an excuse not to do hockey and netball as I was allowed then to go running around the school field during PE.

I started my nurse training in Hastings in 1986, I joined Hastings Athletics Club, but it was during this time that Mum and Dad started to get involved with Brighton Hash and Portslade Hedgehoppers.

By the time I returned home to Brighton I was regularly running with Brighton Hash on a Monday and the Hedgehoppers on a Tuesday (I couldn’t do that now!).

I have been a member of the Hedgehoppers since 1988. I have had periods when I have joined on the Tuesday runs, but recent years I have become a member of Phoenix as I wanted to change direction with my running. I am still a Hedgehopper and love the Fun Run league runs. My first fun run was the Hedgehopper 5 in 1983 – I still have my certificate.

Everyone is so friendly and although I don’t see the other members regularly, I am always made to feel welcome.

So many to choose from but the first Brighton Marathon, I felt so emotional going round and so many familiar faces supporting.

Running the Vertical Kilometre in Chamonix in 2019 the atmosphere was amazing, but it was a tough run.

Three Forts Marathon just, but with retirement looming, I have plans to run the Downlink as and when it starts again.

I’m a better chess player than I am a runner, I represented Sussex and was the school champion.

Look forward to seeing all the Hoppers again.