Tales of how a Hornet and Lord Peter Hedge-Hopperthorne guided Zoe Cherryman in the direction of the Hoppers. Talk of the pain and of course, the cake. Here the ‘Mary Berry’ of the Hedgehoppers shares her running stories and more.

Please tell us a little bit about yourself? i.e. where you grew up, family etc.

I grew up in Bewdley in Worcestershire. A quaint Georgian town on the river Severn. No, no-one has ever heard of it. “Famous” for the floods until they built some magnificent flood defences, The Severn Valley Steam Railway, a bridge designed by Thomas Telford and the West Midland Safari Park. Also home to the Wyre Forest Park Run with a finish on cardiac hill – give it a go if you get the chance! The middle of three very un-sporty children, most weekends were spent watching my dad race. Although he was engine powered with his grasstracking motorbike and sidecar.

I moved to Brighton in the mid 80s to go to Sussex Uni where I studied genetics. Once I had tasted the big city life, I was never going back. Whilst early ambitions included finding a cure for cancer, a lab-based project in my final year at uni had me concluding that research was not for me. Oh no, an Insolvency Practitioner I would be. OK I temped for 6 months to pay off my overdraft and fell into it. During the late 80’s recession there were not many jobs to be had.

When and why did you first start running?

I started running in 2016. I was working in London and looking for something to counteract the 4 hours a day travelling that I could do when I wanted without being tied into gym memberships or evening classes that I could never guarantee I would make it back for. I downloaded the couch to 5K app and off I went. I started walking/jogging round Hove Park in March, did my first parkrun in May and my first half marathon in the October. It’s fair to say I have been obsessed ever since.

I joined in April 2017 I think. I was dragged along to the Lewes West Sussex Fun Run by a friend who was a Hornet. At the start I bumped into Sir Peter Lord Hedgehopperthorne, who I’ve known for probably 20 years through work. He asked me who I was running for and I said I was unaffiliated but had been considering joining a club. He said the Hoppers were for me and to come along on the following Tuesday. I did. They were. Here I am.

The camaraderie of course. Being a part of something, putting that Hopper vest on and getting out there. Although I have to say I get more pleasure out of making/eating the cakes than I do out of the actual running part. Running hurts.

Running hurts. I like it when it stops. I don’t have any one wow moment but my favourite time is early in the morning running on the seafront watching the sun come up over the West Pier. That’s when I understand why I do it.

Half marathon. Every time I think of doing a marathon some part of me gets injured – that would be my wonky left leg. Maybe one day…..

Anything that isn’t too hilly! That said, it has to be parkrun. I miss parkrun. I really enjoyed the parkrun grand prix, going to other local events that I wouldn’t normally do and I always try to fit in a parkrun when I’m away (remember those days when we could travel???). In 2019 Nick and I attempted 12 half marathons (well I got injured at the 11th so couldn’t quite manage it) the farthest afield was the Philadelphia Love Run. We flew out for the weekend and had a brilliant time. We bonded with the 2 hour pacers and talked politics and tried to explain what a Hedgehopper was. Yes, he really did run in a kilt! 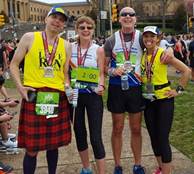 I also really enjoyed the Eden Project half which we did in 2018. It was a beautiful course going through little Cornish villages and the last 3 miles or so were all downhill, finishing in front of the iconic domes. All finishers were given a pasty and a pint. That beats a banana and some water anyday.

Richard Fitzpatrick calls me “slapper”…. Apparently it’s because my feet are very noisy when they slap the pavement. I’m hoping it doesn’t catch on…..

Prior to running, my only other sporting achievements were in rowing. I took up the sport whilst studying for my A-levels. Whilst I enjoyed the camaraderie in the boat, I don’t think I’ve ever experienced a more misogynistic atmosphere. The men there were horrendously chauvinistic. There was however a fantastic ladies coach who was very enthusiastic and encouraging. I rowed in the bow seat and apparently was just there to balance the boat. I was never going to be big or strong enough to do much damage.

I just want to record my thanks to everyone at the club, but especially Val with her bubble run admin, for keeping us sane during this dreadful time. Val, you’re a legend.