I’m the youngest of three daughters, my Husband Neal, Dad Roy and two older Sisters, Sue and Jan are all Hedgehoppers. My early childhood and school years were all in Portslade with senior school being Portslade Community College at Chalky Road, so with school and attendance at the Hedgehoppers I’ve spent a fair few hours at and around our club home.

University saw a move to Hertfordshire and sadly away from the coast. By strange coincidence the location of my campus in Hatfield was the same one attended by Dad forty years earlier when it was known as Hatfield Technical College.

After graduation I returned to Sussex and have spent the last twenty years working in the water industry in one form or another from collecting and analysing rainfall, river flow and groundwater data to monitoring, inspecting and in some extreme cases at odd hours of the night, help repair, South East Water’s clean water supply network. It’s a great job but they didn’t tell me I’d be dangling from a cable thirty feet underground to inspect water tanks when I joined the company!

Running is my main hobby and I have been lucky enough to combine it with some overseas trips and have run in seven different countries outside of the UK. Weekends are often taken up with hiking and camping plus the odd bit of skiing, caving and climbing have been thrown in over the years too.

This one is up for a bit of debate but from chatting to Dad, we think I may have been six or possibly seven, not long distance but was keen to have a go. Dad would go off for and eight or nine mile run and then come back to collect me to take my Uncle and Cousin for a training run, all on the same morning! I also remember enjoying sprinting at junior school but the first race was age thirteen at the Lewes WSFRL for the short distance before the main race. My running through childhood was very sporadic due to suffering quite badly with Asthma.

This should probably be reworded as ‘Who’ for me as that would have to be Dad and spending a lot of my childhood spectating at running events.  There was some early marshalling running the race position sheets back to the computer at one of the Hedgehopper 5 races sometime in the very late 1980’s when the finish was in the grounds of the sports centre at Chalky Road.  Then in 1992, myself and fellow Hopper and school friend Carol Feeney, (along with four other Hopper offspring) were talked into taking part in a relay at Christs Hospital School to mark the 10th Anniversary of the Fun Run League.  Dad was putting together the relay teams and spotted in the rules that each team had to have a junior and six juniors had to be found fairly quickly! Later on it was more to see if the running would help improve my Asthma and thankfully it did.

Not counting some of the early bits about twenty years.

I started running on Tuesday nights in 2002 after training with Dad to get up to four miles so that I could enter the Henfield WSFRL race in 2001.  Initially it was to improve my fitness and distance to enter more races.  Although this almost backfired on Easter Monday 2002 when I decided to have a go at a slightly longer distance.  The Lewes course was extended from five miles up to six due to a start location change and I had only trained up to about four and a half miles.  It wasn’t helped that it was 1st April so initially we weren’t sure if it was an April Fool’s joke but I got round, wasn’t put off and have now run the course sixteen times.

The friendly atmosphere in the club, it’s always very welcoming.  Running is a great sport and should be open to everyone if they wish and I like to think the Hoppers try to cater for this. I’ve made some great friends over the years, some of whom share my slightly nutty attitude towards races and running.   Thankfully Neal also being a fellow runner meant that he didn’t object when the suggestion of rerouting our honeymoon road trip was made to fit in Auckland parkrun.

Coming over the finish line at the Great South Run in 2005 as it was the first time I’d run in a race at that distance and at the time it was a big step up to ten miles, having only started running regularly in 2002.  Making it through the nine mile point was very emotional. I got over the finish line, saw Mum and Dad and burst into tears with relief that I had managed to finish.

26.8 miles at the Giant’s Head Marathon, Dorchester in 2018 (I didn’t get lost, White Star Running are well known for inaccurate distance measuring, I found this out after entering).  Having spent many years refusing to even consider entering a marathon I was talked in to entering the event one evening by two friends.  We set about increasing my distance each week as I hadn’t run anything further than a half marathon. I made it up to 21 miles in training with Neal.

To say it was a baptism of fire may be an understatement.  On the day of the race it was 28 °C and we had around three thousand feet of elevation to tackle.  The two friends unfortunately were forced to drop out at ten and sixteen miles due to injury leaving me with another ten miles to complete on my own.  Luckily the sweeper was fantastic and forced me to eat pretzels at every given opportunity as due to the heat the salt loss was immense.  I tend to keep to half marathons now and moved to Barns Green so we have one on our door step. 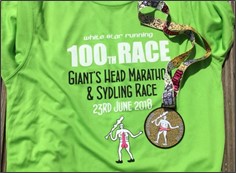 Roundhill Romp at Steyning. The first time I ran it in 2005 there was a huge thunderstorm raging at the start and torrential rain. We couldn’t hear a word of race briefing at the start and there was a river running down Mouse Lane as we ran up towards Wiston House. The weather was so awful that Dad drove up to the car park at the bottom of the footpath up to Chanctonbury Ring to make sure I and another Hedgehopper running with me were ok. He said after that he knew we were ok as he could hear us laughing and shouting before he could see us. The steep grass slope at the end is my favourite part, it’s always a gamble between how fast you can throw yourself down the hill and staying upright!

As part of my degree course I was sent to Brinsbury College to learn how to use and maintain a chainsaw for tree felling and to be licenced for the County Council insurance. The reward for passing the course and receiving our licences was being sent to stay on the edge of a quarry on the island of Madeira for a week. We spent the week felling enormous Eucalyptus trees on an ecological park so that it could be replanted with native tree species.

If you enter any of White Star Running’s ‘dark’ races, make sure you know what you are drinking at the aid station. One year at the Dark Valley Half Marathon which is mostly run through very dark woodland in the Moors Valley Country Park, I downed a cup of what I thought was an energy drink at the half way point, only to find out it was some fairly strong schnapps. I was faster on the second lap though!